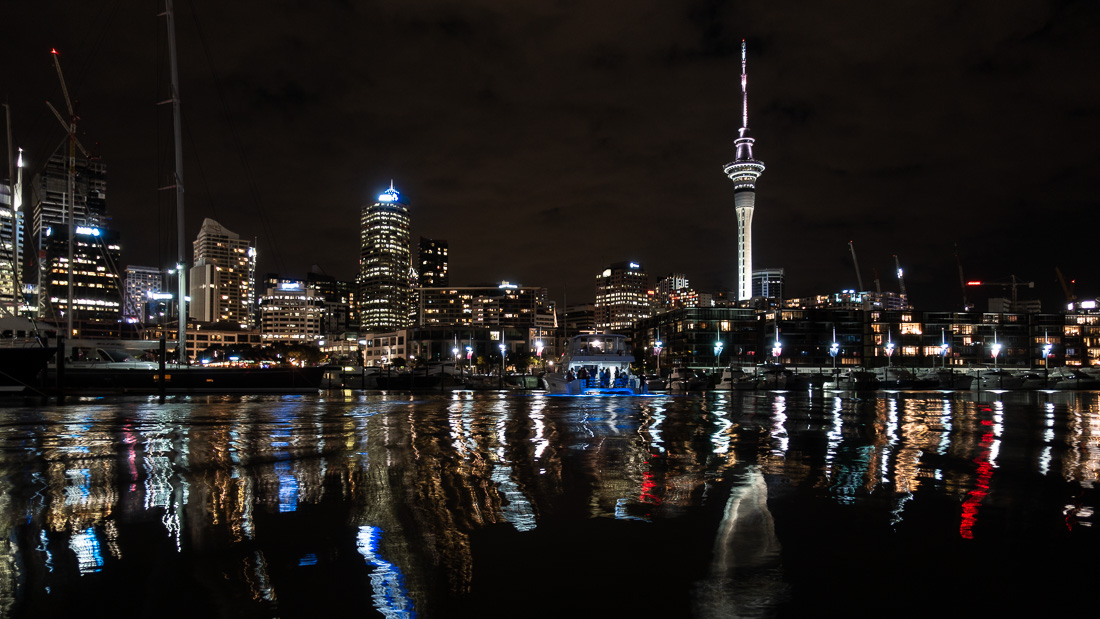 After almost 3 months of skiing every day in Whistler, BC, and socializing with friends, we traveled back to our beloved S/V Whistler in NZ.

We needed to spend a night in a Vancouver airport hotel to make our morning flight. We made the best of it, with good friends joining us for dinner. The flying part of the 30-hour journey included 3 flights with stops in Seattle and Tokyo. Gotta love traveling on Aeroplan these days! Happily our luggage arrived intact too!

We spent five days getting the boat in a state we could move her. Then we headed into Auckland. We wanted to get divers to clean the hulls, shafts and props and that was not allowed at Gulf Harbour Marina. Gulf Harbour was keen to fill our dock space too. The Viaduct had space and it was going to be a change of scene with lots of chandleries and marine services within walking distance.

A bird’s eye view of where we docked (the blue dot on the image below).

During the day we listened to lots of clanking from the hotel construction. They were busy removing the scaffolding. The workmen yelled out signals as they passed the pieces to one another.

During the night noise from the bars makes its way across the viaduct. We managed to sleep through it.

For what the marina charges, it is a bit surprising they have no facilities for the yachties like toilets, showers or laundry. We ran our engines to warm up the water for our showers and Monty broke down and bought an electrical cable and box so we could hook up to power.

At last, I could use a blow dryer on board! It has come in handy for other uses as well, like when a trade needs 230v shore power for a drill!

The dining options were endless. Lots of tourists with the cruise ships visiting.

We hired experienced divers to clean the hulls and props. It took over 2 hours and they were not wasting time. They said they did not see any evidence of marine pests and provided a certificate. The other marinas in the Bay of Islands and Whangarei are trying to keep this Mediterranean Fanworm out but it is well established in Auckland.

We hired World Power to come and do a battery load test. Claire, our “sparky”, thought they might have another season left in them.

After seeing the results of the load test, Monty decided it was wiser to replace. Not fun trying to source batteries in the islands.

On a calm day, we tackled other jobs like going up the mast to lubricate the mast track and shives and raise our code zero sail.

Some scenes from around Auckland.

My heart was often in my throat trying to avoid being run over by the bicycles and electric scooters sharing the pedestrian paths. The “LimeS” (green electric scooters for hire seen above) were taken off the road while we were there. Too many accidents! It was so much more peaceful walking after they were removed.

For a change, I took a few night shots on terra firma! Hard to use a tripod on a boat! Monty kindly played caddie and scouted out interesting perspectives.

Our first couple weeks in NZ seemed time evaporated. We were so busy with boat jobs, we never got to do any touristy things like visit the Maritime Museum or going up Sky Tower. We will just have to come back!

Thanks for coming along on our adventure. Next up, cruising in the Hauraki Gulf.

From Auckland, it was a pretty easy day trip to Waiheke Island. We sailed around the western shore and anchored in Oneroa Bay. After reading…

In Port Denarau, we were checking the forecasts a few times a day and talking with other cruisers about what they thought. Around October 16th,…