After finishing our Advanced Open Water Dive Course in Savusavu, we headed south. We planned on following our sister boat, Exit Strategy, to Fulaga, 200NM south in the Southern Lau Group. About 20 miles south of Savusavu Bay, we reassessed our itinerary.  It looked like it was going to be a long slog, motoring much of the way. The red steering wheel was turned toward Vanua Balavu.  It was closer and we knew a few boats that were there or arriving soon. We slowed down so we could arrive at dawn and have light for navigating the pass.

We navigated around the southern route to Ship Cove in the Bay of Islands.  We had been to the same anchorage in 2016.  We dropped anchor by our sister boat, Golden Glow.

For a few days, only a half dozen boats were anchored in the Bay of Islands, but it gradually filled up as around 30 World ARC boats arrived from Tonga.

It is tradition that cruisers anchoring in the Bay of Islands do “sevusevu” at Daliconi, a village about 5 miles south that “owns” the Bay of Islands  anchorage. The chief was not there at the time, but his sister did a short ceremony, receiving our gift of kava.  She said that if we would like to make a donation, it would be appreciated. Hopefully the money goes to some good purpose.

Lanie, Warwick (S/Y Fusio) and Monty being shown the way to the chief’s house. 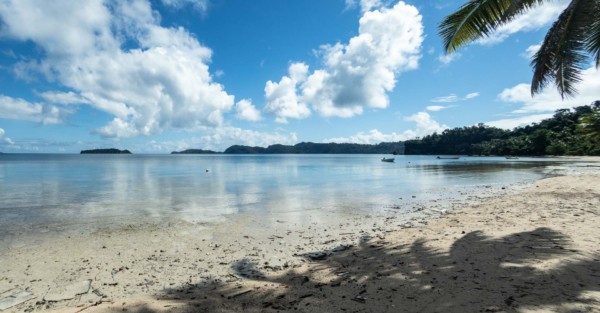 Monty organized a dinghy brigade to a cave.

Winding through the bay of islands, Miami Vice style.

Susan and Bill in the bat cave

There were a few socials, of course. A sundowner or two, a couple group dinners and even a movie night on Golden Glow’s foredeck!

We organized a sunset dinghy float in a tiny inlet surrounded by a large bat colony.  It was so popular that we repeated with even more boats the next evening.

Daylight shots of the bats hanging from the trees. There are thousands living in this colony.

Golden Glow enjoying the jungle like experience, watching the bats.

We watched the bats gradually take flight as the sun set and darkness set in. They filled the sky.

Here is a link to a video.  It is a large file, so it will take some time to load and make sure you have lots of data available!

Snorkelling around the bay of islands is very good too.  Here is a look from above at a coral bommie in Ship Cove.

A look from underwater.

Monty did some free-diving and revisited some swim throughs he did with Frank and Lisa (S/Y Mango Moon) in 2016.  A video of one of his swim-throughs is available below.  You can click on the play button.  Again, it is a large file and will take some time to load. You can view it in full screen if you click on “Vimeo” in the lower right corner and navigate from there.

Views in the Bay of Islands are breathtaking at times.

Sunset from our boat.

Fifty-two days at Nananu-I-Cake! A sufferer of “itchy anchor syndrome”, who would have guessed I (Margy) would have let Whistler remain in the same anchorage…

While eating spaghetti on Monday night, Monty’s crown fell off (his tooth)! Luckily, he didn’t swallow it.  We were on our boat near the kiting spot…