The Ha’apai Agricultural, Fishing and Craft Fair was held in July.  Matafonua Lodge had several guests going, so a few of us yachties piled in the back of a pick up truck with the resort guests for the 14km drive to town.  The fair grounds were full of the locals wearing their traditional dress as a sign of respect for the visiting King of Tonga.  Colourful displays of produce, fish and crafts lined the grounds. Horses, cows, goats, sheep, pigs, chickens and geese were also on display.

Young women dressed in their ta’ovala (woven mats) with others wearing the waist girdles called kiekie.

Hundreds of cabbages lined the display booths, as decoration.

The colourful belts hanging at the top are known as kiekie, and are worn by women around the waist.

Quilting is popular. The quilts are used to decorate gravesites.

Basket for carrying food and gifts. 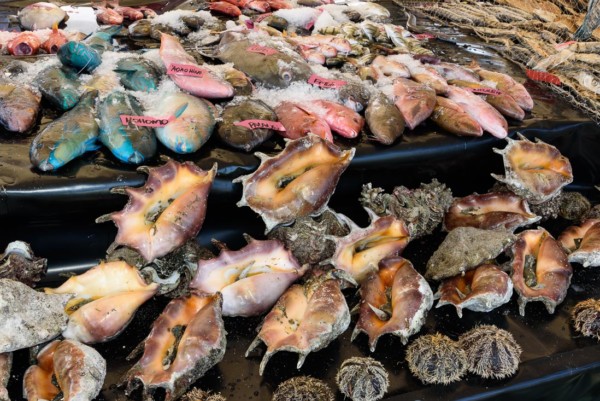 The piglets were giving this sow a few minutes to rest between feedings.

After the King had viewed and judged all the displays, the produce and fish were up for sale.

Notice the men wearing warm clothing as for them, it was winter.

A live turtle! We hope the turtle was released after the show and not eaten, but it is Tonga!

Cultural performance for the King and Royal Family.

We visited a number of anchorages while we were in the Ha’apai. Nomuka Iki was a convenient day sail from Nuku’alofa and had a reasonable…

We were at the Matafonua Lodge anchorage and were heading to Pangai for a couple nights.  We thought it would be fun to invite Darren…