We left New Zealand for the second time on June 13th, not a Friday, fortunately.  Dolphins accompanied us out of Opua.

We had a reasonable passage.  We ran the engines for part of the time in lighter winds, but that was preferable to having high winds and big seas!  We reached the southern island of Tongatapu in just over 7 days, but would have arrived at night which we did not want to chance. We proceeded on passing the Haapai Group, also at night, to Vava’u. We had to slow the boat down which was difficult in 25 knot winds. Monty furled the self-tacking jib a few wraps to reduce it down. We were able to drift at 3 knots through much of the last night.

We arrived on a Wednesday, which turned out to be a holiday in Tonga. It was a surprise to many including the locals. We thought we would have to wait another day to check in but were later informed that the customs officials were around and would check us in, but there would be extra charges due to overtime. At this point, we did not mind and were happy to get settled in on a mooring at Nieafu, the main town of the Vava’u Group.

Over the next several days, we took care of our laundry at Bubbles Laundry and shopped for some fruit and veggies at the market and checked out the Chinese grocers for their wares. We bought some duty free which was allowed within 24 hours of arrival.   We ventured out to Port Maurelle for a night and anchored along with Havachat, an Australian owned cat that we had met in Whangarei.

We checked in at Mounu Island, where Monty planned to do some kite-boarding lessons.   We moored at their one mooring for a few hours, but it was not somewhere we would overnight unless it was going to be dead calm.   For his lessons, it was advised to come either side of low tide. The family that run the island resort were gearing up for a busy period. Their resort would be full in a week and stay that way until October with kiting and whale watching groups. They have 4 huts for the guests and offer lunch and dinner to others with 24 hours notice. 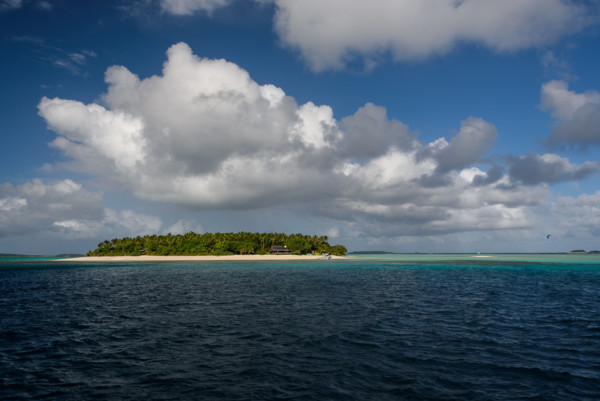 Our first guest arrived from Sydney on June 25th. He had sailed with us in 2014 on the Mahina Expedition, an offshore sailing school run by John and Amanda Neal. We were glad to have him join us and test the new ground of having someone else on board with us for a few weeks. He was a huge help to us both with sailing, mooring, anchoring,, fishing, and a slew of the usual boat chores. He brought us a few toys for the boat and some more duty free, chocolate and sweets. We had lots of fun attending some social activities around town and the island group. We went several lunches and dinners around town, like Taco Tuesday at the Aquarium Café, roast lamb dinner at Mango Café, pizza at Bellavista, but a special treat was the tapas and paella dinner with live Spanish music at La Paella on Tapana Island.

Brad accompanied Monty on his kiting lessons and acted as board boy and company for the instructor, wading in waste deep water while Monty took rides and had some spectacular crashes. I stayed aboard to ensure the boat was secure on the mooring.

We participated in the showing of colours in the harbour, and entered a sail race, a first for us on Whistler.  We went around three of the four marks and decided it would be dark by the time we finished the race, so we went back to our mooring and went ashore for the dinner and dancing! 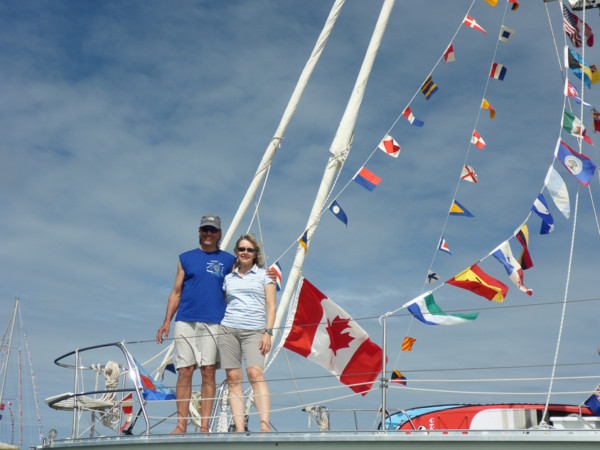 Showing our colours for the King’s birthday!

Near the end of Brad’s visit, we heard some whales were finally showing up in the island group. While we sailed by Port Maurelle, saw a humpback whale a few times.

Internet is not easy here, but we will endeavour to blog when we can.  Hope to hear from those of you who read this!  Thanks for your comments!  They are always a welcome surprise!

Since Brad Johnson’s visit with us, we repeated a few anchorages and have tried some new ones.  Monty said it is like picking which mountain…

We left on May 31st for Tonga.  We had a mix of conditions heading north east of New Zealand.  We sailed for a while and…